After Party: #BBTitans Mmeli And Sandra Get Intimate, Caught Aggressively Cuddling Under The Duvet (Video) 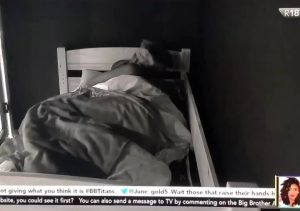 Big Brother Titan housemates, Mmeli and Sandra have been spotted getting intimate under the duvet while others slept.

This is coming shortly after their first Saturday night party which saw the housemates unwind the week’s stress with bottles of alcohol on the dance floor. 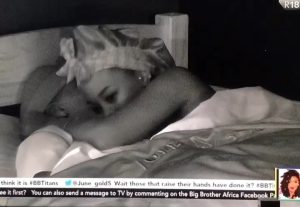 As the housemates finally retired to bed, the camera captured South African’s Mmeli and Nigerian Sandra getting really romantic under the duvet.

Recall Mmeli who is the head of house is entitled to his own private lounge, which gave the two lovebirds enough privacy to be free.

Sandra who seemed to place her lower body on top of Mmeli was spotted showering him with kisses while holding onto him affectionately.

Mmeli seemed to be enjoying the act as he reciprocated while grinning from ear to ear. 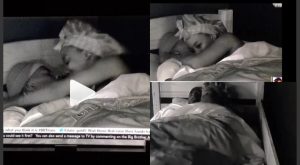