#BB Titans: Twist as Biggie pairs each housemate with opposite gender 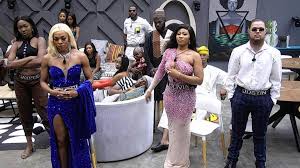 Twist as Biggie pairs each housemate with opposite gender

On sunday, 7th day of the show, after the love eviction show, Big Brother invited Housemates according to gender to play a game. The game according Biggie will decide each person’s fate in the show, moving forward.

Female Housemates moved first into the arena for their challenge, which is to wrap ribbon on a provided pole. Biggie’s instructions stated that no white space on the pole should be visible.

Then, followed by the male Housemates. Biggie directed them to the garden where their own game is prepared. Male Housemates was asked to use a reference  picture to create a replica of chicken lookalike making use of provided cloth buttons.

At the end of the games, all housemates were called together to the arena to pick their partners. And the picking was done according to the position of each Housemates in the games.

Below is how the Housemates made their during the pairing exercise: