BBTitans: “I Only Wants Yvonne For Sex, I Prefer Ipeleng For Marriage”-Juicy Jay Reveals 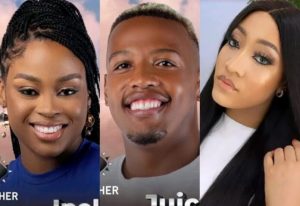 BBTitans: “I Only Wants Yvonne For Sex, I Prefer Ipeleng For Marriage”-Juicy Jay Reveals

Big Brother Titians Housemate, Juicy Jay has disclosed that he is only interested in Co-housemate, Yvonne because of Sex unlike Ipeleng who he wants to marry.

Juicy Jay, a South African, made this revelation during a conversation with Khosi while speaking about his feelings for the two ladies.

The Semi professional Rugby player said he always see Ipeleng as wife or girlfriend material but only felt Lust for Yvonne who he only wants to sleep with.

He further stated that he also see Khosi as a slay queen. This is coming after Yvonne gave Juice Jay a light kiss on the cheek earlier.