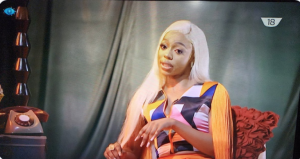 A 25-year-old lady identified as Khosi has been unveiled as the first housemate of the special edition of the MultiChoice Nigeria entertainment series, Big Brother Titans (BBTitans), which commenced today, Sunday, January 15, 2023.
Naija News earlier reported that the reality show is a remodel of the popular Big Brother Naija (BBNaija reality show), usually hosted in Nigeria.

However, BBTitans will have Nigerian and South African ‘giants’ cohabitate for 72 days engaging in a series of activities.

Khosi who happens to be the first housemate hails from South Africa.

She is single and ready to mingle in the reality TV show.

According to Khosi, she is working towards her master’s degree adding that the biggest misconception about her is that she is a slay queen.

Five Things To Know About BB Titans [BBNaija Vs BB Mzansi]
The reality show will be hosted by Nigerian media personalty and popular BBNaija host, Ebuka Obi-Uchendu and South African actor, Lawrence Maleka
BB Titans will last for 72 days starting from January 15th 2023.
Like the Nigerian edition of the reality show, BB Titans giants would participate in house games, quizzes, and a series of tasks for the ultimate prize of $100,000 in cash.
The winner of the reality show will be determined by viewers’ votes across Africa
BB Titans would be streamed in over 45 countries in the Sub-Saharan Africa and also in the United Kingdom, Republic of Ireland and others.